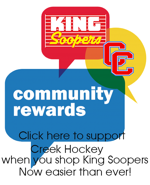 It has been my honor for the last 9 years to lead the Cherry Creek Hockey program in the CHSAA High School and USA Hockey seasons. We have developed a hockey program that is recognized nationally as a High School/USA Hockey Association that develops tremendous players that excel on the ice, in the classroom and in society with character and dignity.

I continue to look back when I was offered the opportunity to build a program from the ground up that would fulfill the core values of Cherry Creek High School; Scholarship,Leadership and Citizenship. It has been exciting and a privilege to lead our program over the last 9 years and watch our student athletes achieve many goals and accomplishments for themselves and Cherry Creek Hockey.

2020 was a year that will forever be remembered in history. As a hockey organization we had to pivot daily for the entire modified season. 2021 brings us back to a normal schedule while continuing to remain vigilant to the health concerns around us.

Our second season in the NAPHL for our V-Prep T1 team has been a success as our players battled CSDHL Teams in a competitive League schedule. Cherry Creek players were heavily scouted and opportunities will be presented as we enter the Tender Season for Junior Teams.

Cherry Creek Hockey has created our own tradition of excellence and is recognized for the success it has achieved on the ice and the players who compete everyday with dedication to detail.

Our Hard Hat is a standard of play and recognizes our players for being a great teammate. We compete as a player and a group every minute of every game. We challenge our opponent and respect them. As a player I am willing to put in the time needed to reach our team goals including excelling in the classroom. Most importantly becoming a family member to your teammates that teaches all how accountability is to self and team.

Cherry Creek Hockey’s highlights over the last 9 seasons include 4 Frozen Four appearances including the 2015 5A State and National Championship season. In that year the semifinal 6 overtime victory over Dakota Ridge could go down in history as one of the most exciting high school playoff games ever. It was followed by a 3 overtime State Championship wins over Monarch. The National Championship 2-1 win over Dubuque capped the amazing season.

Our junior varsity CHSAA team coaches and players are working together to keep our varsity pipeline filled with players ready to compete at the varsity level. Beginning in the fall as a Tier II Varsity Prep team in the CPHL, our junior varsity team gained valuable experience and confidence which contributes to successful seasons at the CHSAA JV level.

The 1st annual Turkey Bowl Tournament listed the Varsity Prep T1 as Champions And highlighted our V-Prep T2 Team as they were selected as the only Tier II team to play in the Tier 1 Tournament. The team competed well in all games.

The sport of hockey travels a road to NCAA hockey unlike any other sport. It is a long and sometimes difficult journey. I am proud of our current alumni who have made the NCAA step and are representing Cherry Creek in some of the best junior leagues in the US and Canada. From Vancouver to Boston and from Minnesota to Florida CC players are making their mark.